A day-long orientation programme on “Empowering Children in Need of Care & Protection” was Saturday organised by the Srinagar Smart City Limited (SSCL) in collaboration with the District Legal Services Authority (DLSA) Srinagar. 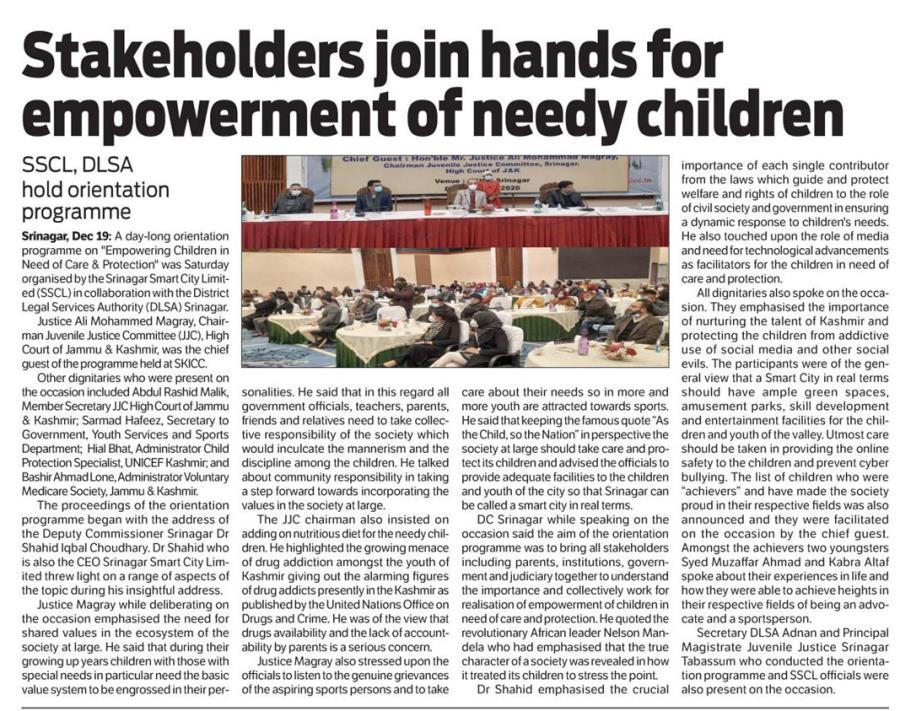 The proceedings of the orientation programme began with the address of the Deputy Commissioner Srinagar Dr Shahid Iqbal Choudhary. Dr Shahid who is also the CEO Srinagar Smart City Limited threw light on a range of aspects of the topic during his insightful address.

Justice Magray while deliberating on the occasion emphasised the need for shared values in the ecosystem of the society at large. He said that during their growing up years children with those with special needs in particular need the basic value system to be engrossed in their personalities. He said that in this regard all government officials, teachers, parents, friends and relatives need to take collective responsibility of the society which would inculcate the mannerism and the discipline among the children. He talked about community responsibility in taking a step forward towards incorporating the values in the society at large.

The JJC chairman also insisted on adding on nutritious diet for the needy children. He highlighted the growing menace of drug addiction amongst the youth of Kashmir giving out the alarming figures of drug addicts presently in the Kashmir as published by the United Nations Office on Drugs and Crime. He was of the view that drugs availability and the lack of accountability by parents is a serious concern.

Justice Magray also stressed upon the officials to listen to the genuine grievances of the aspiring sports persons and to take care about their needs so in more and more youth are attracted towards sports. He said that keeping the famous quote “As the Child, so the Nation” in perspective the society at large should take care and protect its children and advised the officials to provide adequate facilities to the children and youth of the city so that Srinagar can be called a smart city in real terms.

DC Srinagar while speaking on the occasion said the aim of the orientation programme was to bring all stakeholders including parents, institutions, government and judiciary together to understand the importance and collectively work for realisation of empowerment of children in need of care and protection. He quoted the revolutionary African leader Nelson Mandela who had emphasised that the true character of a society was revealed in how it treated its children to stress the point.

Dr Shahid emphasised the crucial importance of each single contributor from the laws which guide and protect welfare and rights of children to the role of civil society and government in ensuring a dynamic response to children’s needs. He also touched upon the role of media and need for technological advancements as facilitators for the children in need of care and protection.

All dignitaries also spoke on the occasion. They emphasised the importance of nurturing the talent of Kashmir and protecting the children from addictive use of social media and other social evils. The participants were of the general view that a Smart City in real terms should have ample green spaces, amusement parks, skill development and entertainment facilities for the children and youth of the valley. Utmost care should be taken in providing the online safety to the children and prevent cyber bullying. The list of children who were “achievers” and have made the society proud in their respective fields was also announced and they were facilitated on the occasion by the chief guest. Amongst the achievers two youngsters Syed Muzaffar Ahmad and Kabra Altaf spoke about their experiences in life and how they were able to achieve heights in their respective fields of being an advocate and a sportsperson.